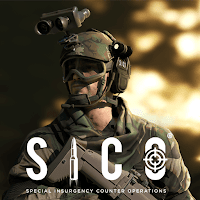 Mobile
SICO™ is a SPECIAL INSURGENCY COUNTER OPERATIONS which is a free-to-play multiplayer action game and modern combat online game that you play with your friends!
SICO™ comes with the most intense Multiplayer Action, First Person Shooter, Sniper, Kill Streaks, and Engaging Multiple Maps. Survival in this game is the only key to win the game!!
Play this Modern Strike Online Game with Friends and Start shooting in the game that has it all: There are lots of game modes, multiple characters, engaging maps, and full-fledged campaign!

SICO™ - Modern Warfare Shooter Game: A Multiplayer Action Game
✪ In the Spectator Mode, you can watch your team mates engaged in live online FPS battles
✪ Enjoy the Intense Shooting Action of “Modern Combat Online Game” in Squad vs Squad matches
✪ Fight for yourself and your team survival in the classic mode of 100 players and enjoy the Modern Strike Online Game with Friends
✪ Talk to your friends and plan strategies according to the situation in FPS Game (Action Game)