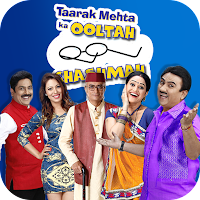 Taarak Mehta Ka Ooltah Chashmah is an Indian Hindi language television sitcom. This is India's longest running television show. This show went on air on July 28, 2008. It runs from Monday to Friday on SAB TV.

Our app Only Links To Third-Party URLs. We Do Not Host Any Files. We do not take any liabilities for any kind of copyright violations by the users.
Thanks let's enjoy the fun. This is just a guide and not the official app and we have no relation with the official app.
our application just for use of guide for SUB TV not any affected original app of SUB TV & Sony channels.

If you like our app please rate us and share with your friends.
Show More Show Less
ADS
More Information about: Taarak Mehta Ka Ooltah Chashmah Videos SAB TV