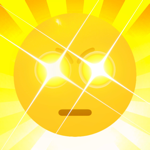 iPad
More Screenshots for iPad
Take the work out of deep frying and warping memes. No need to go to your computer or laptop; use the original and best, feature-packed, Meme Deep Fryer. The all-purpose meme maker and creator.

Deep fry the last frame of your video to upload to TikTok!

Open your created memes in TikTok and Snapchat!

Deep fry any meme, image, or animated GIF from your photo library or Gfycat and share the finished meme to camera roll. Share your memes via iMessage using the iMessage sticker export tool.

Use a variety of meme generators including Breaking News, Fake Message and more! Be creative!

Download GIFs from gyfcat and deep fry or warp. Export the finished result to GIF or mp4. Quick fry videos and turn up the volume! Share on tiktok, YouTube and more.

Make and share your own templates with the template designer and eight template blocks. Use the built-in expanding brain template to get started. Create memes and share on Reddit!

Use multiple touch to resize and rotate effects on your deep fried memes.

Use popular memes, images, and lens flares in iMessage with free stickers. Send your own meme sticker designs to iMessage.

Save to camera roll to share, or save your meme project to work on later, or adapt and change as meme trends move on.

On This Day In History Widget Reference